Discovery has potential to improve therapies for cancer and other diseases

The Retinoblastoma protein (pRB) has long been studied for its role in cell growth and the prevention of cancer. In a new Lawson Health Research Institute study, scientists have discovered that pRB plays another, larger role with the potential to enhance therapies for cancer and other diseases such as HIV.

Most of the DNA in the human genome is composed of repetitive sequences called ‘junk DNA’. Many of these are leftover pieces of ancient infections. These sequences are thought to have no positive contribution to the human body and are normally kept silent. If they do replicate, they can be reinserted into the human genome where they damage genes and contribute to diseases such as cancer.

“This is a novel discovery that changes the way cancer geneticists have thought about pRB and EZH2. Most researchers never dreamt that these two proteins have thousands of locations in our DNA that they are regulating,” said Dr. Dick, a scientist at Lawson and the London Regional Cancer Program at London Health Sciences Centre (LHSC). “This opens up endless avenues for therapeutics across a multitude of diseases, including anti-viral agents. It could give patients new choices in the treatment of their disease.”

A number of drugs are being tested to either activate pRB function or to block EZH2, focusing on the role these two proteins play in cell growth. pRB is understood to control cell growth while EZH2 can become overactive in some cancers and silence other genes that control cell growth.

This new study predicts that drugs called EZH2 inhibitors may also be used to help the immune system target cancers. Blocking EZH2 will lead to expression of ‘junk DNA’, so cancer cells will appear to the immune system as if they are infected by a virus. The immune system can then target and kill these cells. 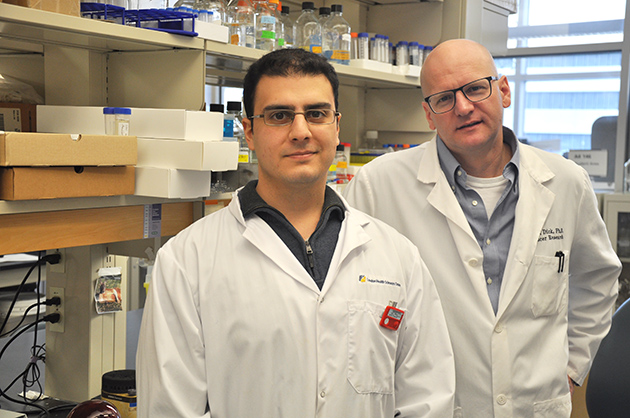 “This discovery has significant implications for the use of immunotherapies and the importance of pRB testing in cancer diagnosis and prognosis,” said Dr. Dick, also a professor in the Departments of Biochemistry and Oncology at the Schulich School of Medicine & Dentistry, Western University. “It suggests that cancers that are pRB deficient will respond better to immunotherapies since repeats will be expressed, and those that are pRB positive might respond well to a combination of EZH2 inhibitors and immunotherapies.”

The research also has implications for a number of other diseases. HIV is thought to hide in immune memory cells in a similar way to ‘junk DNA’. Since these cells cannot be targeted by conventional treatments, patients remain HIV positive. EZH2 inhibitors could be used to reveal the virus’ hiding place by forcing the virus to express. Active viral gene expression could then be targeted using drugs that are already on the market.

“This study enhances our understanding of pRB’s functions and its role as a tumor suppressor,” said Dr. Dick. When the pRB-EZH2 complex was eradicated in a mouse model, there was no regulation of ‘junk DNA’ and the mice eventually developed cancer. Completely eliminating the silent repetitive sequences for long periods of time can lead to instability of the genome and formation of disease. “We have been researching pRB for years and have never seen such a significant effect. It’s clear that the pRB-EZH2 complex is extremely important to both the genesis and the treatment of cancer.”

“The silencing of repetitive DNA appears to contribute to the tumor suppressive properties of pRB and this was previously unappreciated,” said Charles Ishak, PhD candidate in Dr. Dick’s lab and first author on this study. “Our work predicts that certain drugs in clinical trials that target these proteins could disrupt the silencing of repetitive junk DNA. This could be perceived as negative, but there is also evidence that similar therapeutic strategies can yield immune-enhancing properties to make cancerous cells appear more foreign and more readily detectable by the immune system. The next step is to determine if this is the case with drugs that target our proteins of interest.”

The study, “An RB-EZH2 Complex Mediates Silencing of Repetitive DNA Sequences”, is published in the international journal, Molecular Cell. Its significance was also highlighted by Cancer Discovery.