One in 25 patients with very low kidney function were admitted to hospital with severe confusion and other cognitive-related symptoms a few days after being prescribed a common muscle relaxant.

A new study from ICES Western, Western University and Lawson Health Research Institute has shown that patients with kidney dysfunction who were prescribed a high dose of the drug baclofen, were more likely to be admitted to hospital for disorientation and confusion, than those who weren’t prescribed the drug. Their results were published today in the high impact journal, JAMA and are being presented at the same time at the American Society of Nephrology meeting in Washington, D.C.

“When we looked at people with low kidney function (30 per cent or less) who received a high dose of baclofen from their prescriber, approximately one in 25 were being admitted to hospital with severe confusion, typically over the next few days, “ said Dr. Amit Garg, Professor at Western’s Schulich School of Medicine & Dentistry and Scientist at ICES and Lawson. “If you compare that to a group of people who had low kidney function who didn’t get baclofen, that risk is less than one in 500, so it’s quite a dramatic difference between the two groups.”

Video of the researchers explaining the study findings:

The research was initiated because of observations that nephrologists were noting in clinic at London Health Sciences Centre.

Dr. Peter Blake, Professor at Schulich Medicine & Dentistry, Lawson scientist and coauthor on the study says this drug is commonly prescribed for muscle spasms and muscle pain, and is also prescribed off-label for alcoholism, gastro-esophageal reflex disease, and trigeminal neuralgia. He says it is widely prescribed because it has not previously been associated with serious side-effects.

More than eight million prescriptions for the drug were handed out in the United States in 2016, and despite numerous case reports linking baclofen with cognitive symptoms in patients with kidney disease, this is the first population-based clinical study to look at the association between the two.

“It came to my clinical attention dealing with patients with advanced kidney failure, that this drug that is generally thought to be relatively harmless, appeared to be the precipitant of severe confusion,” said Dr. Blake. “These are patients who had previously been very oriented, and they were suddenly extremely confused and when you took a history, we understood that they had recently started this drug, baclofen.” 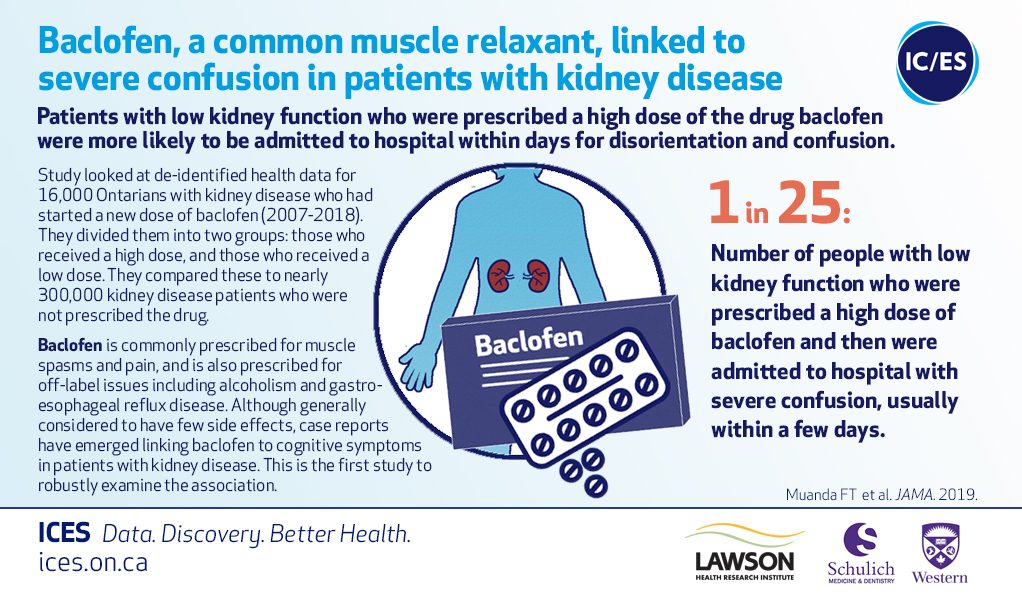 Using ICES data, the research team looked at a group of approximately 16,000 people in Ontario with kidney disease who started a new dose of baclofen between 2007 and 2018. They divided the patients into two groups, a group that received a high dose, and a group that received a low dose of the drug and compared both to a group of almost 300,000 kidney disease patients who were not prescribed the drug at all.

“We found that in current practice most patients are getting a similar dose of baclofen no matter what the level their kidney function is,” said Dr. Garg who is concerned about this discrepancy in dosing because prescribing guidelines already suggest a lower dose for patients with kidney dysfunction that isn’t being followed. “We also found that the risk for hospitalization for severe confusion was higher amongst patients who received doses that were higher versus doses that were lower.”

The authors hope this study will better inform physicians and pharmacists about the use of baclofen for patients with kidney disease. “This study shows quite clearly the potential harm of this drug. When a patient with low kidney function presents to the hospital with confusion, when their medication list is reviewed baclofen should be considered as a potential culprit. We’re hoping regulatory agencies will now take a look at this and perhaps add a new black box warning for baclofen. With this new information prescribers should reconsider risk-benefit, and should be quite cautious before they prescribe this drug. When they believe the drug is indicated, a low dose should be considered, and patients and their families should be warned about what to look out for in terms of side effects.”

The authors also say patients should not stop their prescription medications without talking to their doctor.