LONDON, ON – A team of authors from Lawson Health Research Institute and University Health Network (UHN) have released details on Canada’s first published case of suspected vaping-related lung injury. Published today in CMAJ, the case study may be the first to describe a new type of injury from vaping products.

The case differs from those described in the recent rise of vaping-related lung injuries called EVALI (e-cigarette or vaping product use associated lung injury), which are characterized by a specific type of damage called alveolar injury. This case instead represents a lung injury that appears similar to “popcorn lung,” a condition seen in microwave popcorn factory workers exposed to the chemical diacetyl. The condition causes bronchiolitis where the small airways in the lungs become inflamed and damaged.

The authors describe a case of life-threatening bronchiolitis in a 17-year-old Ontario male who initially sought care after a week of persistent cough. He was eventually hospitalized needing life support in the intensive care unit. After ruling out other causes in the previously healthy teen, the authors suspected flavoured e-liquids as the culprit. The patient had been vaping daily using a variety of flavoured cartridges and tetrahydrocannabinol (THC).

“This case of life-threatening bronchiolitis was challenging. The damage appeared similar to that seen in factory workers exposed to diacetyl,” explains lead author Dr. Karen Bosma, Associate Scientist at Lawson and Critical Care Specialist at London Health Sciences Centre (LHSC). “Given the patient’s vaping activity and the absence of other causes, we suspect his lungs became damaged from vaping compounds.”

The youth narrowly avoided the need for a double lung transplant. He spent a total of 47 days in hospital and suffered chronic damage to his airways. He is currently recovering from his lengthy intensive care unit stay and is abstaining from e-cigarettes, marijuana and tobacco.

Earlier this fall, the Middlesex-London Health Unit reported on the youth’s condition as the first case of vaping-related lung injury in Canada as an early warning. This research case study provides detailed medical information on the extent and type of injury, as well as treatment.

Emerging reports indicate that e-cigarettes are causing a variety of lung illnesses and injuries. According to a 2017 report, e-cigarettes are the most commonly used nicotine products by Canadian youth with an estimated 272,000 reporting use within the last 30 days.

“E-liquids expose users to several potentially harmful chemicals. While we can’t be sure of the exact mechanism in this case, it was reported to Health Canada for further investigation,” says Dr. Constance Mackenzie, Respirologist and Toxicologist at LHSC and St. Joseph’s Health Care London. “It highlights the need for further research into the safety and toxicity of e-liquid compounds, and awareness of the various types of lung injury that can result from vaping.”

High-resolution images of the patient's lung scans are available to media upon request. These images must be attributed to CMAJ. 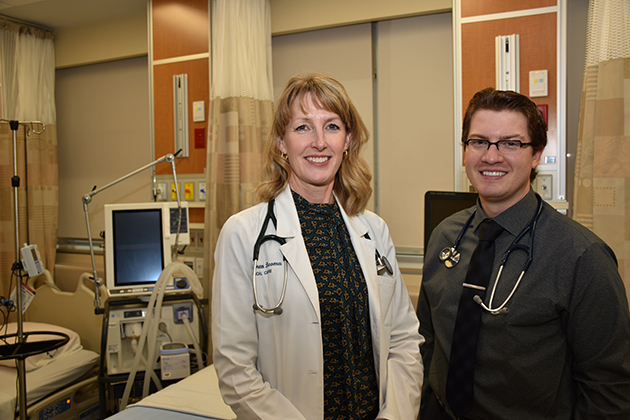