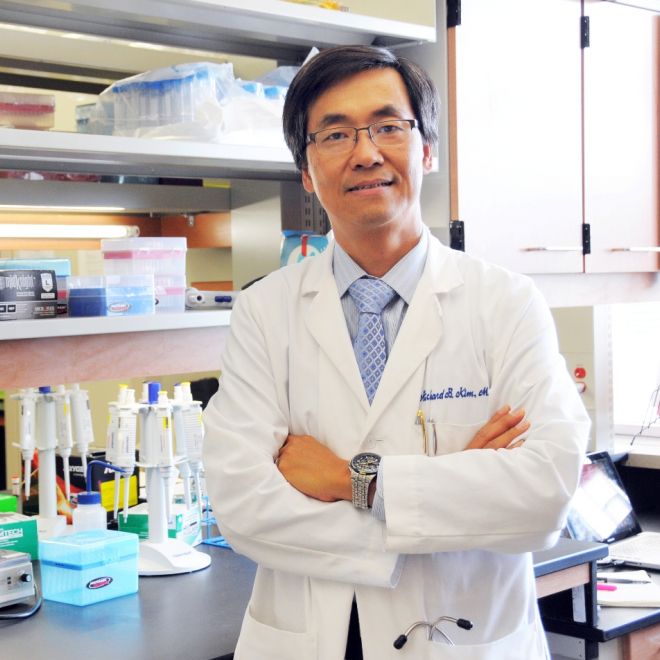 The main focus of my research is that of better understanding the molecular determinants of interpatient variation in drug responsiveness. We carry out bench-to-bedside as well as translation of research finding to better patient care. My team has particular strengths in the field of drug transport, metabolism, and pharmacogenomics.

Dr. Kim received his medical degree from the University of Saskatchewan in 1987. After completing an internship and residency training in Internal Medicine, he went on to carry out fellowship training in Clinical Pharmacology at Vanderbilt University from 1991-1994, and then remained at Vanderbilt as a faculty member in Clinical Pharmacology where he rose to the rank to tenured full Professor by 2004.

Dr. Kim was recruited to Western from Vanderbilt University in 2006 to head the Division of Clinical Pharmacology, which has now become the largest clinical pharmacology training program in Canada, and second largest in North America. He also holds the Wolfe Medical Research Chair in Pharmacogenomics at Western.

He has been actively leading a program of excellence in Personalized Medicine. In 2008, he started the first personalized medicine clinic in Canada and since 2011, personalized medicine inpatient consultation service has been available for patients who are at risk for toxicity or subtherapeutic benefit from a number of drugs in clinical use whether for children or the elderly, for cardiovascular disease, inflammatory conditions, and cancer.

He is an elected Member of the American Society for Clinical Investigation (ASCI) and Fellow of the American Association of Pharmaceutical Scientists (AAPS) and Canadian Academy of Health Sciences (CAHS).