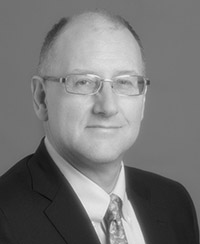 As the Scientific Director of Lawson Health Research Institute, David oversees all scientific activities at one of Canada’s top ten hospital-based research institutes.

David is ultimately responsible for Lawson’s research master plan. Working alongside the Chief Operating Officer, Research, and our Research Executive Committee, he drives the institute’s strategic scientific priorities forward. David also serves as a key link between the London hospitals, the university, and the City of London, identifying key opportunities for collaboration and strengthening Lawson’s research mission in the context of the city’s rich academic partnerships.

To complement his role at Lawson, David is the Integrated Vice President of Research at London Health Sciences Centre and St. Joseph's Health Care London. At Western University, he holds the Lawson Professorship in Diabetes Research and is a Professor in the Departments of Medicine, Physiology and Paediatrics.

Educated at the University of Nottingham and at Worcester College, University of Oxford, he has published over 200 scientific papers and maintains an active program in diabetes research and stem cell biology. David has previously served as Chair for both Research Canada and the National Board of the Canadian Diabetes Association (CDA). He is a recipient of the CDA’s Frederick G. Banting Award, as well as of the Medal of the Society for Endocrinology from the UK.  David is a member and Past Board Chair of the Diabetic Pregnancy Study Group (DPSG), an affiliate of the European Association for the Study of Diabetes.

A key advocate for health research in London and beyond, David currently participates on a number of research committees of the Council of Academic Hospitals of Ontario (CAHO) and is a Board member of HealthCareCAN, the newly merged Association of Canadian Academic Healthcare Organizations (ACAHO) / Canadian Health Association (CHA), as well as Co-Chair of their Sub-Committee of VPs of Research. In 2015 he was re-elected to the Board of Directors for Research Canada. David was inducted as a fellow of the Canadian Academy of Health Sciences (CAHS) in 2011.

David’s research focuses on the generation of new insulin producing beta cells in the pancreas as a strategy for the reversal of diabetes. Currently, he is researching the ability to manipulate stem cells to become beta cells, which could increase the supply of tissue available for human islet transplantation in those suffering from type 1 diabetes, but also the possibility of inducing targeted regeneration of new beta cells within the pancreas removing the need for transplantation. Other projects include looking at the linkage of low birth weight to an increased risk of diabetes in later life, and the ways in which environmental factors, such as nutrition might trigger or protect against diabetes.