Lawson Health Research Institute is ranked eighth in the country according to the 2018 edition of “Canada’s Top 40 Research Hospitals List” by Re$earch Infosource. This strong position has been maintained by Lawson for the past five years and also keeps the institute within the top five institutions in Ontario.

“As a hospital-based research institute, our innovation happens where care is delivered,” says Dr. David Hill, Lawson Scientific Director. “Every day, teams of researchers are working directly with clinicians and patients to improve treatments, or create entirely new ones. They find innovative methods of delivering services that drive efficiency and reduce costs.”

The top 40 list analyzes hospital-based research institutes from across the country on several metrics, including total research income from the previous fiscal year. The ranking looks at funds received from all sources, including both internal and external, to support research at the organization. According to the report, Lawson received $123,255 million in research income in 2017, which was a 0.8 per cent drop from the previous fiscal year.

Dr. David Hill advocates for increased scientific funding nationally. “We held our position despite the modest decrease in funding. Canada as a whole requires significant investment in scientific discovery to increase the well-being of Canadians and build a robust economy.”

This year, a special spotlight on intellectual property (IP) is showcasing the top Canadian organizations – universities, corporations, hospitals and government departments/agencies – patenting at the US Patent and Trademark Office.

Lawson, as the research institute of LHSC and St. Joseph’s, is featured in the top 10 list for Hospital Patent Leaders as measured by ownership of patents granted between 2013-2017. Lawson has ranked in the sixth spot with 13 patents owned.

Commercialization opportunities are managed through WORLDiscoveries®, the business development arm of London’s extensive research network. Born out of a partnership between Lawson, Robarts Research Institute and Western University, WORLDiscoveries® draws upon a mix of industry connections, sector-specific market knowledge, and business development expertise to help researchers and local inventors commercialize their discoveries through licensing and new company spin-offs.

A Stroke of Genius 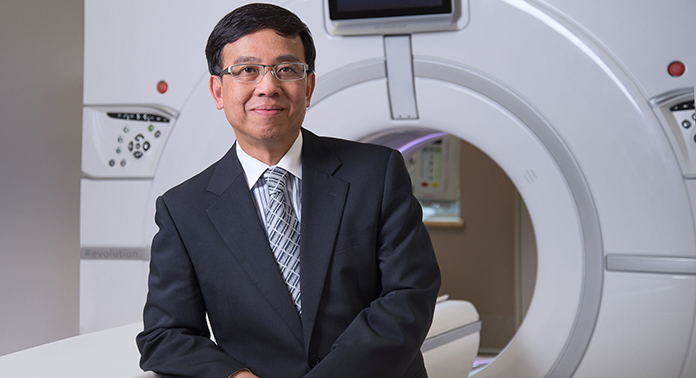 Based at St. Joseph’s Hospital in London, Dr. Ting-Yim Lee specializes in computed tomography (CT) imaging, a type of x-ray technology that captures images of slices of the body. As a young scientist, he dreamed of using CT imaging to measure how blood flows in the human body. The idea was to develop software that could be installed on existing CT scanners to make quick, easy work of a very complex algorithm. If a patient came to the emergency room suffering from a stroke, it would allow the doctor to quickly analyze and address the damage.

Thanks to decades of public and private sector support, Dr. Lee’s idea has evolved from concept to prototype to clinically-approved product. Through a licensing deal with GE Healthcare, his software is now installed on 70 per cent of the company’s new CT scanners on the market. It’s currently in use in more than 8,000 hospital imaging departments around the world.

Stroke is a situation where every minute of delay in treatment has grave consequences on the recovery of the patient, and this software allows physicians to quickly decide on the best treatment for the patient. Dr. Lee is extending his technology to measure blood flow in whole organs, including predicting and monitoring how cancer and heart attacks respond to treatment. The royalties from the licenses enabled Lawson to install Canada’s first PET/CT scanner to complement CT Perfusion with metabolic information from PET scanning.

Novel discovery in the field of Parkinson’s Disease 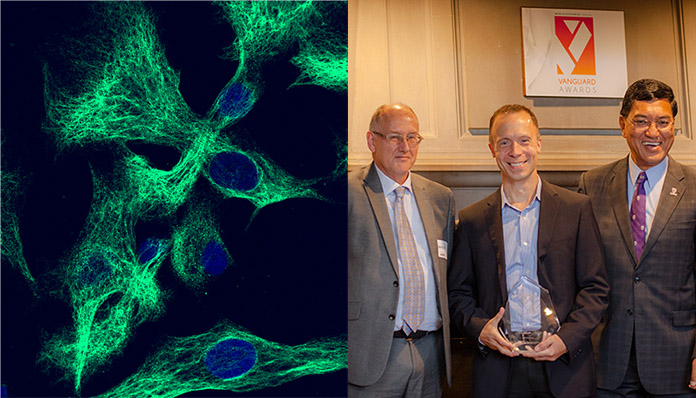 In addition to a busy neurosurgery practice, Dr. Matthew Hebb maintains a highly productive research program. Dr. Hebb is creating tools to advance Parkinson’s Disease research and therapeutics across the globe. Parkinson’s Disease is characterized by progressive neurological impairment caused by the death of cells in the nervous system. Dr. Hebb’s team provided a novel description of brain-derived progenitor cells (BDPCs) that could protect and stimulate re-growth of disease-affected neurons. This discovery may offer critical insight into the disease process and provide a new personalized source of brain-derived cells for delivering therapy back into the same individual.

By using a patient’s own BDPCs, Dr. Hebb hopes to slow or halt disease progression and stimulate regeneration of damaged brain circuitry. BDPCs may further advance drug, genetic and functional screening across broad patient populations. This work also resulted in a patent and partnership with STEMCELL Technologies to develop innovative research tools for Parkinson’s Disease and other incurable neurological diseases.

Dr. Christopher Schlachta is Medical Director of CSTAR, the Canadian Surgical Technologies & Advanced Robotics, at LHSC. His current research interests are focused on development of computer-assisted surgical techniques and technologies to enhance care and training. Along with his team, he has demonstrated how computer-assisted technologies in the operating room can enhance communication among surgeons and trainees to produce better outcomes for patients. He is currently partnering with industry to commercialize operating room technology developed with engineers at CSTAR.

His Wireless Hands-free Surgical Pointer system incorporates infrared and inertial tracking technologies to address the need for hands-free pointing during minimally invasive surgery. The combination of these technologies allows for optimal movement of the pointer and excellent accuracy while the user is located at a realistic distance from the surgical monitor. 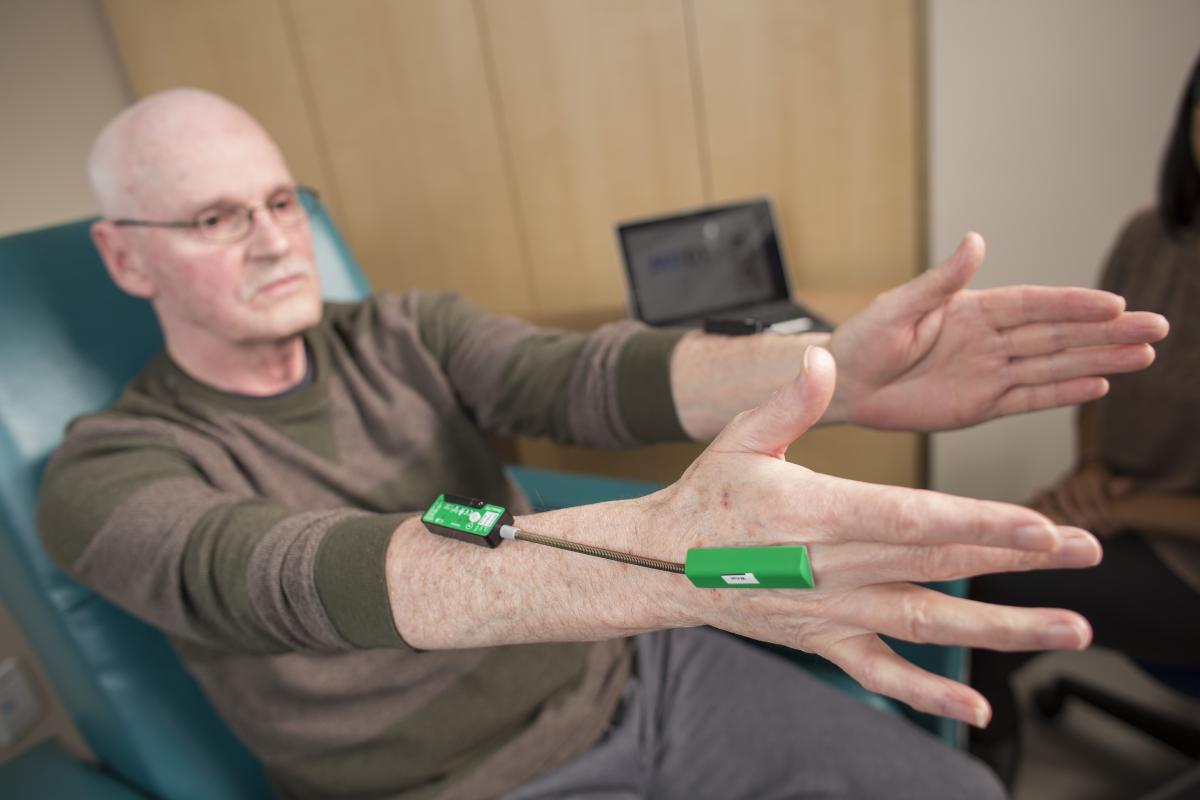 Dr. Mandar Jog operates the London Movement Disorders Centre and has driven the development of TremorTek, a wearable sensor technology that has already successfully treated hundreds of research patients who suffer from tremors in their arms and hands. These tremors, typically caused by Parkinson’s disease or essential tremor, are a common movement disorder symptom yet there is no effective treatment. Neurotoxin therapy has been identified as a possible treatment for tremors; however, an injection in the wrong place or at the wrong dose can cause negative side effects. Everyone experiences tremors in different ways – the location and strength of the movements, and how often they occur varies widely.

Using commercially available sensor technology, Dr. Jog and his team were able to isolate independent muscle movements. They created a system that matched the muscle activity pinpointed by the sensors with the correct amount of toxin to administer. This kinematic technology can be applied to the pre-treatment assessment of patients and the information generated can guide the placement of botulinum toxin. The technology has been taken by a spinoff company MDDT Inc. that has been working with numerous stakeholders interested in its applications.